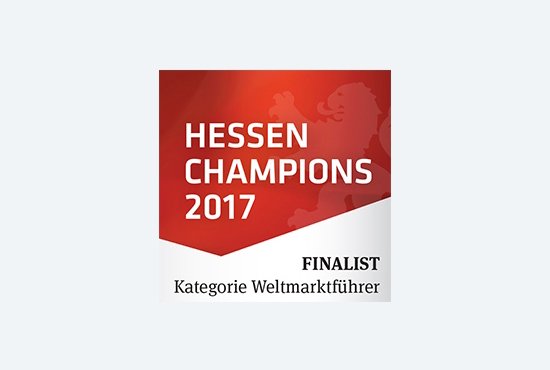 Ten Hessian companies have reached the final of the competition „Hessen-Champions 2017“, one of them in two categories. This was announced by the Hessian Ministry of Economic Affairs, Energy, Transport and Regional Development (HMWEVL), the Association of Hessian Entrepreneur Associations (VhU) and the Mittelständische Beteiligungsgesellschaft Hessen (MBG H) on Friday in Wiesbaden. The jury had selected the finalists from a total of 65 candidates. „All 65 participants have a story to tell. They are already a winner just because they have prevailed in a tough competitive environment of excellent entrepreneurs, „said the Hessian Minister of Economics Tarek Al-Wazir, VhU President Wolf Matthias Mang and Jürgen Zabel, Managing Director of MBG H.“ We are pleased about the multitude of innovative and dedicated entrepreneurs who ensure that Hessen is also at the very top of the international competition. „The Hessen State Innovation and Growth Prize encompasses the categories world market leader, job engine and innovation.

The winners in the three categories were selected by a prominent jury of representatives from business, politics and the media. Prime Minister Volker Bouffier, Economics Minister Tarek Al-Wazir and VhU President Wolf Matthias Mang honor the winners in front of more than 1000 guests during the Hessian Entrepreneurs Day on November 7 at the Kurhaus in Wiesbaden. With the „Hessen Champions“, the Ministry of Economic Affairs, the VhU and the MBG H pay tribute to their entrepreneurial achievements. The award will be presented for the 17th time. Hessen Trade & Invest GmbH (HTAI) is responsible for the organization of the competition.

The finalists in the category world market leader

EppsteinFoils GmbH & Co KG, Eppstein
For 165 years, the Eppstein-based company has been synonymous with technical films made from the metals lead and tin and their alloys. In addition to the small thickness, the films are characterized by a variety of product properties such as oxygen impermeability, electrical conductivity, corrosion resistance and a low melting range. The precision films are currently used in materials testing, medical technology, electronics, the packaging industry and photovoltaics. With the existing product range in the mentioned fields of application, EppsteinFOILS is today market leader worldwide. The Eppstein location employs around 100 people. Approximately 80 percent of the films are exported abroad.

Nord-Micro GmbH & Co. OHG, Frankfurt am Main
The Nord-Micro is an independent air carrier of the UTC Aerospace Systems Group based in Frankfurt / Bergen-Enkheim. 481 employees develop, produce and maintain so-called cabin printing systems on site. With the aid of these control systems, passengers in the aircraft cabin can breathe safely and comfortably. Nord-Micro entered the market in 1988 and is now the world leader. More than 80 percent of all wide-bodied aircraft today are equipped with systems and components from Hesse.

PRÄWEMA Antriebstechnik GmbH, Eschwege
PRÄWEMA Antriebstechnik GmbH, headquartered in Eschwege in northern Hesse, Germany, is a manufacturer of precision machine tools with currently 280 employees and a turnover of 85 million euros in 2017. The core competence of PRÄWEMA is the gearing, i. The company offers a wide range of special machines to machine gears, shafts or synchronous powertrain components. The main customers of PRÄWEMA are the worldwide automotive industry (OEMs and suppliers).